Overall reaction to this presentation is in a blog post. This review goes over each slide with comments, and may seem overly critical. However, from the post:

. . . this is better hot-hydrogen LENR work than I’ve seen anywhere before.

Two MHE facilities at Kobe University and Tohoku University and a DSC (differential
scanning calorimetry) apparatus at Kyushu University have been used for excess-heat
generation tests with various multi-metal nano-composite samples under H(or D)-gas
charging. Members from 6 participating institutions have joined in planned 16 times
test experiments in two years (2016-2017). We have accumulated data for heat generation
and related physical quantities at room-temperature and elevated- temperature conditions,
in collaboration. Cross-checking-style data analyses were made in each party and
compared results for consistency. Used nano-metal composite samples were PS（Pd-SiO2）
-type ones and CNS(Cu-Ni-SiO2)-type ones, fabricated by wet-methods, as well as PNZ
（Pd-Ni-Zr）-type ones and CNZ（Cu-Ni-Zr）-type ones, fabricated by melt-spinning and
oxidation method. Observed heat data for room temperature were of chemical level.

Results for elevated-temperature condition: Significant level excess-heat evolution data
were obtained for PNZ-type, CNZ-type CNS-type samples at 200-400℃ of RC (reaction
chamber) temperature, while no excess heat power data were obtained for single nanometal
samples as PS-type and NZ-type. By using binary-nano-metal/ceramics-supported
samples as melt-span PNZ-type and CNZ-type and wet-fabricated CNS-type, we
observed excess heat data of maximum 26,000MJ per mol-H(D)-transferred or 85 MJ
per mol-D of total absorption in sample, which cleared much over the aimed target value
of 2MJ per mol-H(D) required by NEDO. Excess heat generation with various Pd/Ni
ratio PNZ-type samples has been also confirmed by DSC (differential scanning
calorimetry) experiments, at Kyushu University, using very small 0.04-0.1g samples at
200 to 500℃ condition to find optimum conditions for Pd/Ni ratio and temperature. We
also observed that the excess power generation was sustainable with power level of 10-
24 W for more than one month period, using PNZ6 (Pd1Ni10/ZrO2) sample of 120g at
around 300℃. Detail of DSC results will be reported separately. Summary results of
material analyses by XRD, TEM, STEM/EDS, ERDA, etc. are to be reported elsewhere. 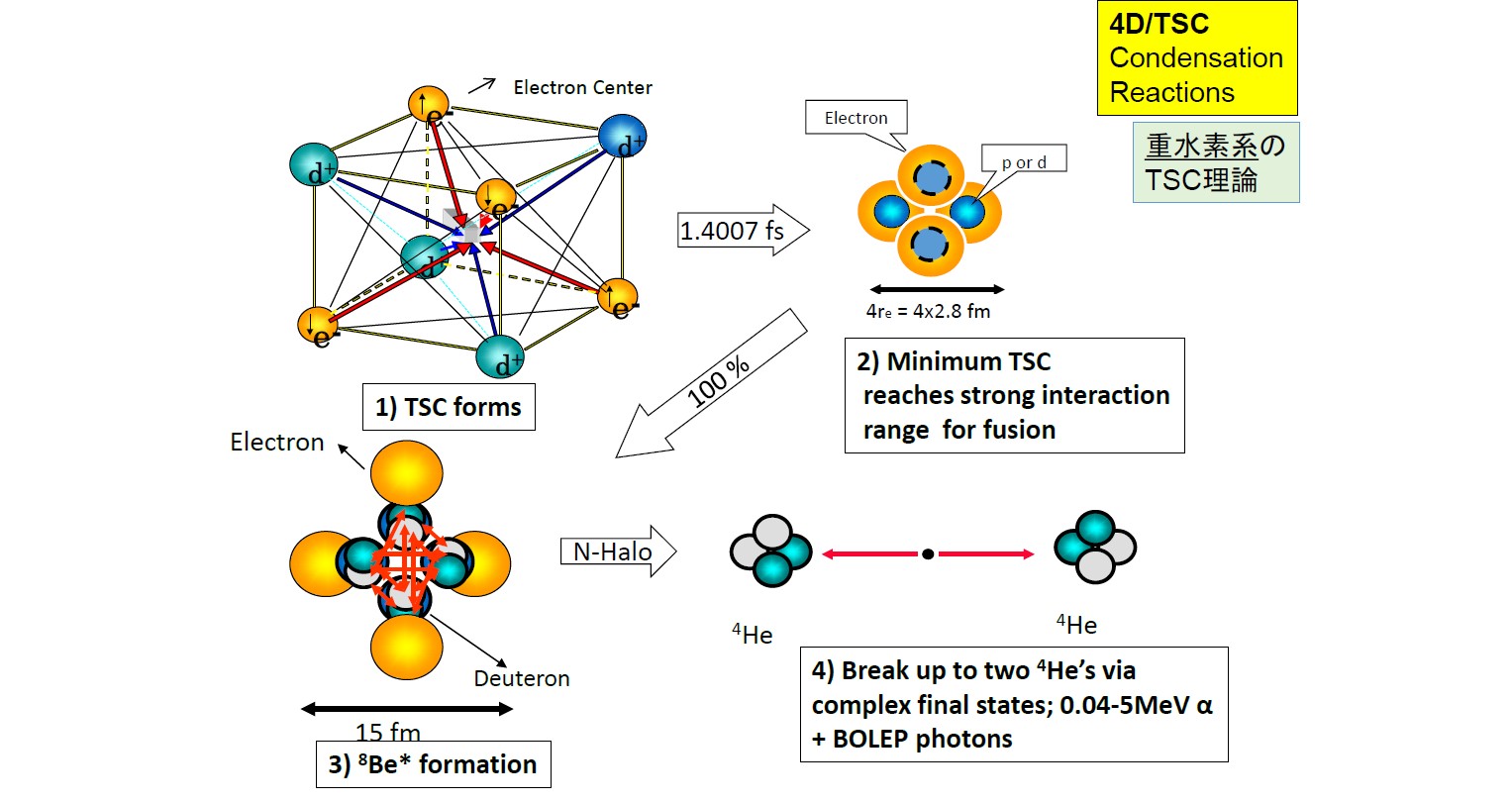 This is a summary of Takahashi TSC theory. Takahashi found that the rate of 3D fusion in experiments where PdD was bombarded by energetic deuterons was enhanced 10^26, as I recall, over naive plasma expectation. This led him to investigate multibody fusion. 4D, to someone accustomed to thinking of plasma fusion, may seem ridiculously unlikely; however, this is actually only two deuterium molecules. We may image two deuterium molecules approaching each other in a plasma and coming to rest at the symmetric position as they are slowed by repulsion of the electron clouds. However, this cannot result in fusion in free space, because the forces would dissociate the molecules, they would slice each other in two. However, in confinement, where the dissociating force may be balanced by surrounding electron density, it may be possible. Notable features: the Condensate that Takahashi predicts includes the electrons. Fusion then occurs by tunneling to 100% within about a femtosecond; Takahashi uses Quantum Field Theory to predict the behavior. To my knowledge, it is standard QFT, but I have never seen a detailed review by someone with adequate knowledge of the relevant physics. Notice that Takahashi does not detail how the TSC arises. We don’t know enough about the energy distribution of deuterium in PdD to do the math. Because the TSC and resulting 8Be are so transient, verifying this theory could be difficult.

Takahashi posits a halo state resulting from this fusion that allows the 8Be nucleus, with a normal half-life of around a femtosecond, to survive long enough to radiate most of the energy as a Burst of Low-Energy Photons (BOLEP), and suggests a residual energy per resulting helium nucleus of 40 – 50 KeV, which is above the Hagelstein limit, but close enough that some possibility remains. (This energy left is the mass difference of the ground state for 8Be over two 4He nuclei.)

Notice that Takahashi does not specify the nature of the confining trap that allows the TSC to arise. From experimental results, particularly where helium is found, the reaction takes place on the surface, not in the bulk, so the trap must only be found on (or very near) the surface. Unless a clear connection is shown, this theory is dicta, not really related to the meat of the presentation, experimental results.

Yay! I’ll keep my peace for now on the “study for industrial application.” Was that part of the charge? It wasn’t mentioned.

“Typical case” hides the variability. The expression of results in heat/moles of deuterium is meaningless without more detail. Not good. The use of differential scanning calorimetry  is of high interest.

System has 5 or 6 thermocouples (TC3 is not shown).

Reaction chamber is the same for both test systems. It contains 4 RTDs.

These were difficult to decode. Some tests were actually two tests, one at RT (Room Temperature) and another at ET (Elevated Temperature). Other than the DSC test, the samples tested were all different in some way, or were they?

“20% difference between the integrated values evaluated from TC2 and those
from RTDav : due to inhomogeneity of the 124.2-g sample distributed in the
ZrO2 [filler].” How do we know that? What calibrations were done? Is this test 14 from Page 17? If so, the more optimistic result was included in the table summary. The behavior is unclear.

The labs are not presenting data in the same format. It is unclear what is common and what might be different. The behaviors are not the same, regardless, which is suspicious if the samples are the same and they are treated the same. The difference, then, could be in the calorimetry or other aspects of the protocol not controlled well. The input power is not given in the Kobe plot. (This is the power used to maintain elevated temperature). It is in the Tohoku plot, it is 80 W, initially, then is increased to 134 W.

“2～8W of AHE lasted for a week at Elevated Temp. (H-gas)” is technically sort-of correct for the Kobe test (i.e., between 2 and 8 watts of AHP (this is power, not energy)  started out at 8 W average and declined steadily until it reached 2 W after 3.5 days. Then it held at roughly this level for three days, then there is an unexplained additional brief period at about 4 W. The Tohoku test showed higher power, but quite erratically. After almost rising to 5 W, for almost a day, it collapsed to zero, then rose to 2 W. Then, if this is plotted correctly, the input power was increased to raise the temperature. (for an environmental temperature, which  this was intended to be, the maintenance power is actually irrelevant, it should be thermostatically controlled — and recorded, of course. Significant XP would cause a reduction in maintenance power, as a check. But if they used constant maintenance power, then we would want to know the environment temperature, which should rise with XP. But only a little in this experiment, XP being roughly 2% of heating power. At about 240 hours, the XP jumped to about 3.5 W. I have little confidence in the reliability of this data, without knowing much more than is presented.

“Wex: 20W to 10W level excess-power lasted for a month.” This is puffery, cherry-picking data from a large set to create an impressive result. Yes, we would want to know the extremes, but both extremes, and we would even more want to know what is reliable and reproducible. This work is still “exploratory,” it is not designed, so far, to develop reliability and confidence data. The results so far are erratic, indicating poor control. Instead of using one material — it would not need to be the “best” — they have run a modest number of tests with different materials. Because of unclear nomenclature, it’s hard to say how many were different. One test is singled out as being the same material in two batches. I’d be far more interested in the same material in sixteen batches, all with an effort that they be thoroughly mixed, as uniform as possible, before dividing them. Then I’d want to see the exact same protocol run, as far as possible, in the sixteen experiments. Perhaps the only difference would be the exact calorimetric setup, and I’d want to see dummy runs in both setups with “fuel” not expected to be nuclear-active.

One of the major requirements for calorimetric work, too often neglected, is to understand the behavior of the calorimeter thoroughly, across the full range of experimental conditions. This is plodding work, boring. But necessary.

I disagree that those are the next phase. The first phase would ideally identify and confirm a reasonably optimal experiment. That is not actually complete, so completing it would be the next phase. This completion would use DSC to more clearly and precisely identify an optimal mixture (with many trials). A single analytical protocol would be chosen and many experiments run with that single mixture and protocol. Combining this with exploration, in attempt to “improve,” except in a very limited and disciplined way, will increase confusion. The results reported already show very substantial promise. 10-25 watts, if that can be shown to be reasonably reliable and predictable, is quite enough. Higher power at this point could make the work much more complex, so keep it simple.

Higher power then, could be easy, by scaling up, and then, as well, increasing COP could be easy by insulating the reactor to reduce heat loss rate. With sufficient scale and insulation, the reaction should be able to become self-sustaining, i.e., maintaining the necessary elevated environmental temperature with its own power.

Theory of mechanism is almost completely irrelevant at this point. Once there is an identified lab rat, then there is a test bed for attempting to verify — or rule out — theories. Without that lab rat, it could take centuries. At this point, as well, low cost (i.e., cost of materials and processing) is not of high significance. It is far more important at this time to create and measure reliability. Once there is a reliable experiment, as shown by exact and single-variable replications, then there is a standard to apply in comparing variables and exploring variations, and cost trade-0ffs can be made. But with no reliable reactor, improving cost is meaningless.

This work was almost there, could have been there, if planned to complete and validate a lab rat. DSC, done just a little more thoroughly, could have strongly verified an optimal material. It is a mystery to me why the researchers settled on Pd/Ni of 7. (I’m not saying that’s wrong, but it was not adequately verified, as far as what is reported in the presentation.

Within a design that was still exploratory, it makes sense, but moving from exploration to confirmation and measuring reliability is a step that should not be skipped, or the probability is high that millions of dollars in funding could be wasted, or at least not optimally used. One step at a time wins, in the long run.