Modelling of the Calorimeters 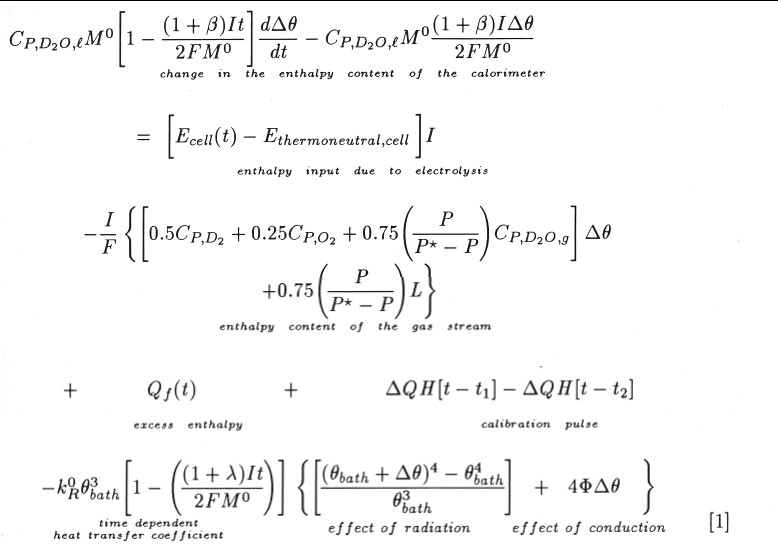 In equation [1] the term

allows for the change of the water equivalent with time;
the term β was introduced to allow for a more rapid decrease than would be given by electrolysis
alone (exposure of the solid components of the cell contents, D2O vapour carried off in the gas
stream). As expected, the effects of β on Qf and K0R can be neglected if the cells are operated below 60°C. Furthermore, significant changes in the enthalpy contents of the calorimeters are normally only observed following the refilling of the cells with D2O (to make up for losses due to electrolysis and evaporation) so that it is usually sufficient to use the approximation [2]

allows for the decrease of the radiant surface area with time but, as we have already noted, this term may be neglected for calorimeters silvered in the top portion
(however, this term is significant for measurements made in unsilvered Dewars (1); see also (7)). Similarly, the effects of conductive heat transfer are small. We have therefore set Φ = 0 and have made a small increase in the radiative heat transfer coefficient k0R to k’R to allow for this
assumption. We have shown (see Appendix 2 of (1)) that this leads to a small underestimate of Qf (t); at the same time the random errors of the estimations are decreased because the number of parameters to be determined is reduced by one.

We have also throughout used the temperature of the water bath as the reference value and
arrive at the simpler equation which we have used extensively in our work: