In my training, they talk about three realities: personal reality, social reality, and the ultimate test of reality. Very simple:

In personal reality, I draw conclusions from my own experience. I saw a bear in our back yard, so I say, “there are bears — at least one — in our neighborhood.” That’s personal reality. (And yes, I did see one, years ago.)

In social reality, people agree. Others may have seen bears. Someone still might say, “they could all be mistaken,” but this becomes less and less likely, the more people who agree. (There is a general consensus in our neighborhood, in fact, that bears sometimes show up.)

In the ultimate test, the bear tears your head off.

Now, for the kicker. There is a bear in my back yard right now! Proof: Meet Percy, named by my children. 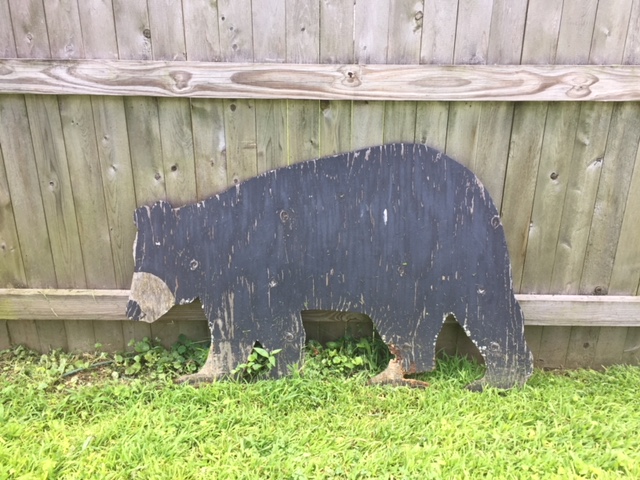 I didn’t say what kind of bear! Percy is life-size, and from the road, could look for a moment like the animal. (The paint is fading a bit, Percy was slightly more realistic years ago, when I moved in. I used to live down the street, and that’s where I saw the actual animal.)

The concept of social-test reality came up in my just-finished study of an article by Peter Hagelstein, an editorial in Infinite Energy in 2013, “On Theory and Science Generally in Connection with the Fleischmann-Pons Experiment.”

I had looked at that essay because it was quoted by a LENR personality on a private mailing list in what occurred to me as attempt to prove I was wrong about something or other. I replied:

I love it when someone cites evidence making my points, as [redacted] did there. I had seen the Hagelstein essay, but I almost always read with increased care what people cite in commenting on my writing, and so I read it again. Wow! Peter says, clearly, a great deal that I’ve been saying, to derisive response from [redacted], and, sorry to say, [redacted]. The Hagelstein essay suffers to some extent from extended sarcasm, making it tricky to distinguish what he is seriously proposing or asserting, and what is sarcasm.

I intend to review the essay on the blog. There are some i’s to dot and t’s to cross, perhaps, at least according to my lights, but it’s really quite good. The sarcasm is also easily funny, if it weren’t also tragic. For sanity, I recommend sticking with “funny.”

Whether it is right, or whether it is wrong, to destroy the career of a scientist who has applied the scientific method and obtained a result thought by others to be incorrect, is not a question of science. There are no scientific instruments capable of measuring whether what people do is right or wrong; we cannot construct a test within the scientific method capable of telling us whether what we do is right or wrong; hence we can agree that this question very much lies outside of science.

The review is long, being a back-and-forth on a long essay. It is as if Peter and I were able to sit down for an afternoon and chat. That’s never happened, so far, though I have had brief communications with Peter on various matters. I hope that we will be able to connect more deeply.

Meanwhile, out of writing this review I came across a video of a talk given by Peter, last November. This may be the best talk on Cold Fusion, ever. For those whose eyes glaze over when Peter starts in on theory, I recommend pretending to be a small child, and simply don’t care. Children are not reactive to what they don’t understand, that’s learned later. And that is why children learn so quickly. They absorb.

I’ve been doing this for a while with Peter, and . . . I’ve known the theory of how to learn like a child (since I was a teenager), and I created a career that way, but it still amazes me when it works. Give me a few more years and I might even be able to explain his theory. (And as with Takahashi, sometimes, short of that, I notice and am able to explain aspects that are not difficult to understand, or to ask useful questions.)

One thing is obvious to me: Storms doesn’t understand what Hagelstein proposes. Storms discounts vacancies as the Nuclear Active Environment, for a reason that always made sense to me: vacancies are normal structures, and NAE requires something special to happen, since ordinary palladium lattice is not nuclear-active.

But Peter is suggesting that the FP experimental environment is creating a special material, on the surface of the palladium, a material with superabundant vacancies. He is not talking about ordinary single-atom vacancies, but Fukai vacancies. He notices that codeposition might create such material, and that the ordinary FP approach also involves dissolved and redeposited palladium on the surface of the cathode. Nanoparticle approaches may create material with superabundant vacancies as well.

Peter is not a rigid theorist. He picks up and uses and discards ideas, continuing to churn and mull over the material and various ways of looking at it. However, I can see something developing in Peter, a familiarity, and with that, an increase in confidence, without losing his essential detachment.