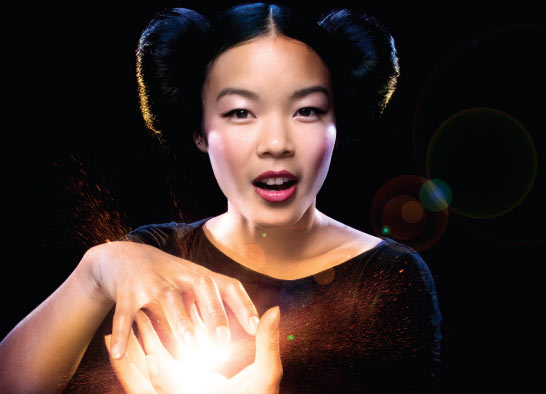 This page (October 1, 2006) was linked from the defunct D2Fusion web site.

Russ George has been popping up in LENR circles again, so I decided to check out the history (which I knew mostly as rumor from people he had formerly worked with, in circles where he had apparently become persona non grata), and I found the image above, which I put here as eye candy. Nice, eh? I hope her experience with cold fusion was not a total bust and that her life has been productive and worthwhile. I don’t see that she has been mentioned anywhere else on this topic. Great photo, though!

Some comments from the article on Chao:

Laura later blogged about cold fusion (March, 2007) and about the fun she was having at work. And more.

And even more, an embarrassment of riches. “My professional life is not progressing as planned.”

She is a fantastic blogger. Her response to an actual question about cold fusion is priceless. And then:

“Your CEO says that your lab is melting,” JB whispered into my ear.

For the purpose of the 7×7 Hot 20 Under 40 party, my company had printed me brand new business cards that read “Nuclear Physicist,” despite the fact that my official title was actually ‘science technician.’ In light of my situation, I decided to enlist support. Showing up with my friend JB, the CTO of Tesla Motors (who used to be a fusion researcher himself), would help me obtain the outrageous amount of publicity my company was expecting me to generate, and also satisfy the magazine, which had advertised me as the up and coming genius of the year. (Geez, no pressure.) My CEO, unfortunately, failed to inquire into JB’s past before lecturing him about our runaway success in cold fusion.

“Apparently, the fusion is so out of control,” JB said, barely able to hold back his laughter as he repeated my CEO’s claims, “that your laboratory instruments keep vaporizing. HAHAHAHAHAHA!”

I should have known right then that eventually (read: very soon) the company would no longer be a company.

The job has evaporated by December, 2007. (Laura Chao had a bachelor’s degree in mechanical engineering.) I assume the CEO was George.

So … the New Energy Times “expose.”  Steve Krivit is a yellow journalist, it’s his shtick.  He’s also done a lot of work, and what he has written about Russ George appears to be well-supported.

So Russ George on LENR Forum. His own thread.

Here is the very RAW geiger data one can see some excursions well above the long duration ‘background’ counts. Given the relative insensitivity of Geigers to gamma (or x-ray) photons the Androcles deuterated fuel mixture is doing something quite extraordinary as there is only a fraction of a gram of fuel mix, about the volume of 5-10 grains of rice. https://www.lenr-forum.com/attachment/5106-andro-may7-pdf/

What is immediately noticeable is that the “excursions” are occurring at 24-hour intervals. No evidence is presented connecting the counts with the fuel mix. The LF user who questions what had been done is banned on LF, by Alan Smith, who is sponsoring George’s current research. George reveals his thinking about Andrea Rossi:

Is the above cryptic statement intended to mean that you still think Rossi has demonstrated LENR? If so, why on Earth would you think it, given all the evidence to the contrary over the past 7+ years?

No number of blowhard armchair trolls is worth one iota of real data, so what is your point. Rossi has shown plenty of interesting data that speaks to those skilled in the art.

The art of the con, indeed. It takes one to know one.

Russ George took research possibilities and turned them into personal promotion, he was more blatant in this than Rossi. Both managed, for a time, to impress, in some way or other, real scientists.

There are real investors looking for opportunities to support cold fusion, and they tested Rossi’s claims, and his devices, to the hilt, and found nothing but lies, damn lies, and no statistics.

One  LF user (Dewey Weaver) actually represents them (though not officially on that forum). These people have invested on the order of $70 million in LENR over the last few years, they literally put their money where their mouth is. They don’t talk much, in fact.

Russ George is a big talker, talking big, always sure of himself. And then there is Alan Smith.

4 thoughts on “Russ George and the D2Fusion team”