It’s a conversation between ODS as MrStrong, an open Encyclopedia Dramatic sock of Oliver, about Skeptic from Britain, and Michaeldsuarez, whom I have known for many years. I’ve seen a lot from him. I have never found him to lie. Here, let it speak for itself. I’ll kibbitz a little. 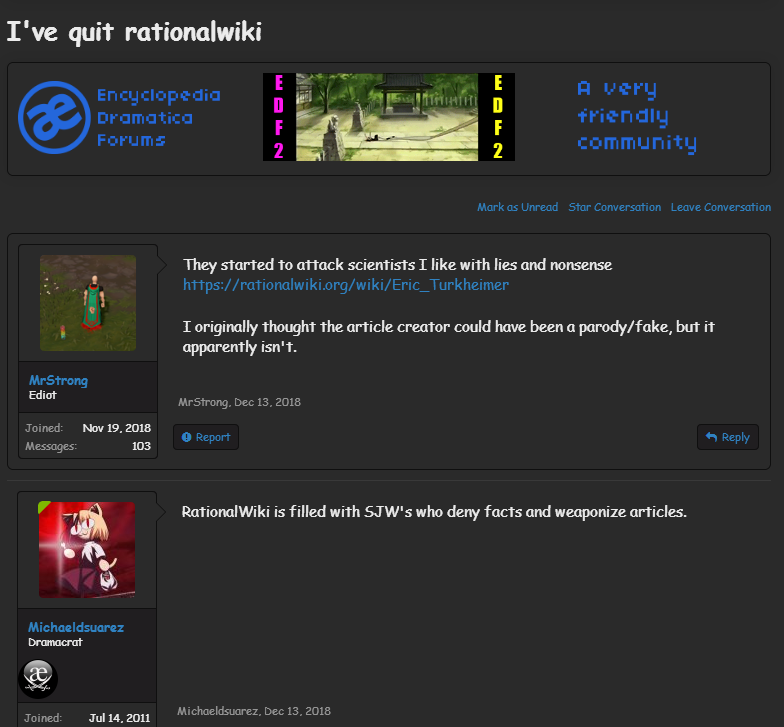 CBH started the article. From the interests (hereditarianism, alt-right, intelligence research), I’d have suspected Oliver. He’s claiming not and it rings true. Who, then? Darryl? I will look at the edit timings, which can be interesting. Meanwhile: 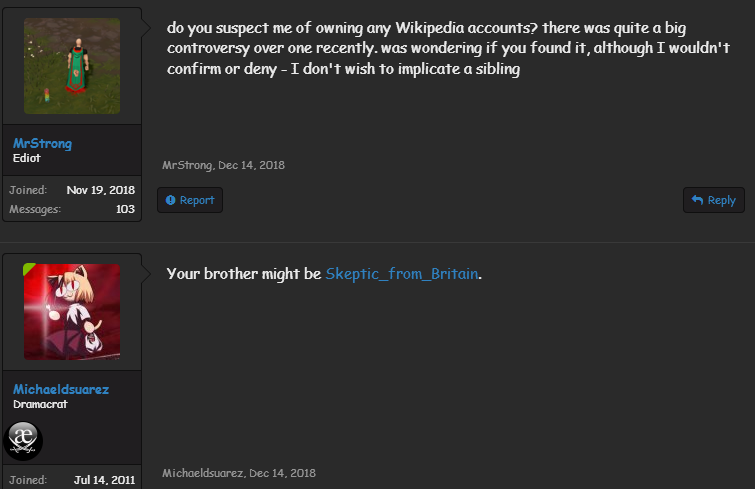 Lucky guess. This is not rocket science; after one has looked at a lot of Smith accounts, it’s pretty easy to spot them. But I wasn’t looking at that point. Until Oliver made a fuss. on ED.

Most (all) VPN usage I have seen smells like Darryl, not Oliver. Oliver generally does not understand, apparently, that all the disruption over the years creates suspicion of one from some of the actions of the other. If he lets his brother run disruptive socks, including impersonations, doesn’t blow the whistle, the blowback can hit him. If he really wants it all to stop, he needs to stop, and probably to come clean and stay clear, don’t claim it was his brother then claim that he was lying for years just because his brother gets upset with him for telling the truth. Or for whatever reason. Oliver apparently joined in the complaint to the WMF about me, so he participated in deception.

I found, in email with him, that he could sound sane and like maybe there was a possibility of cleaning up the mess, then he would blow up about this or that. But MrStrong did stop editing. December 20, he dropped a note on my User talk page about the flap over Skeptic from Britain, and though I don’t always follow ED, I’d been ignoring his trolling, I do receive email notifications and I saw that. So I checked it out. Ah. Darryl L. Smith, it was obvious.

The prediction about a new article for Malcolm Kendrick was roughly correct. There was a ten day gap after Skeptic from Britain vanished in a cloud of smoke and bad smell, and the Kendrick article was started. I think that Darryl was busy planting rotting herrings on blogs, accusing one of his critics of being him and then, of course doing everything he can to accuse me of being the Real Problem, lying about Darryl, etc. 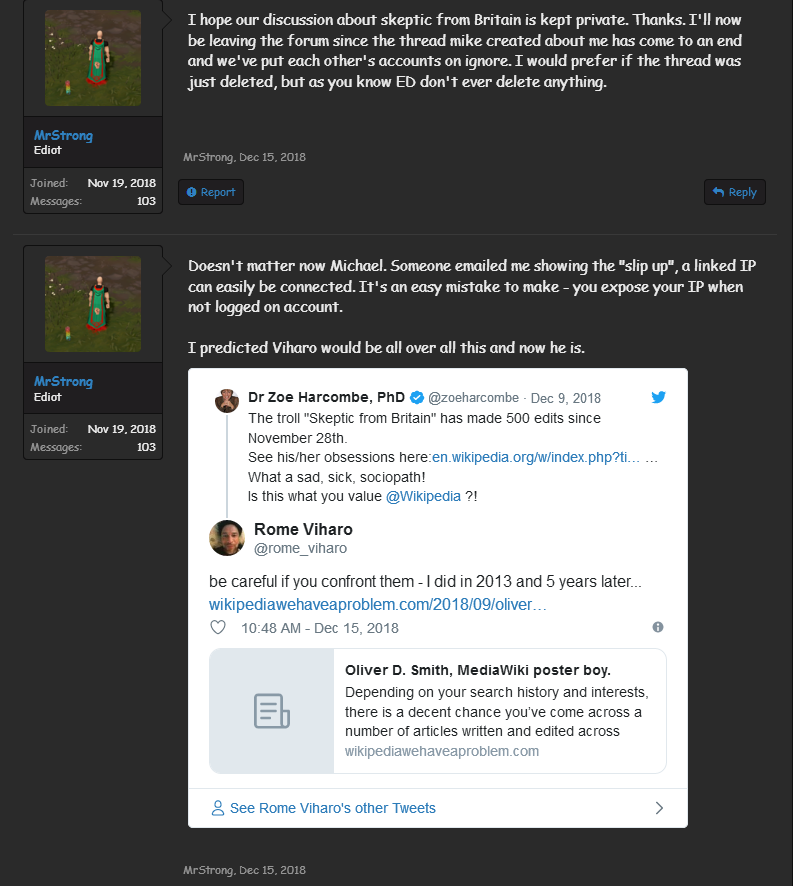 I haven’t seen the IP edit. There are some hidden revisions on Wikipedia, it might have been one of those. I don’t see any sign that any Wikipedian figured out who Skeptic from Britain was. On December 15, SfB changed his name (and then retired with another name change on the 20th. But it looks to me like he started preparing to bail from Wikipedia in November, when he created John66 on RationalWiki. I have a plot of all the edits of Debunking skepticism, Skeptic from Britain, and John 66. They fit like a glove. 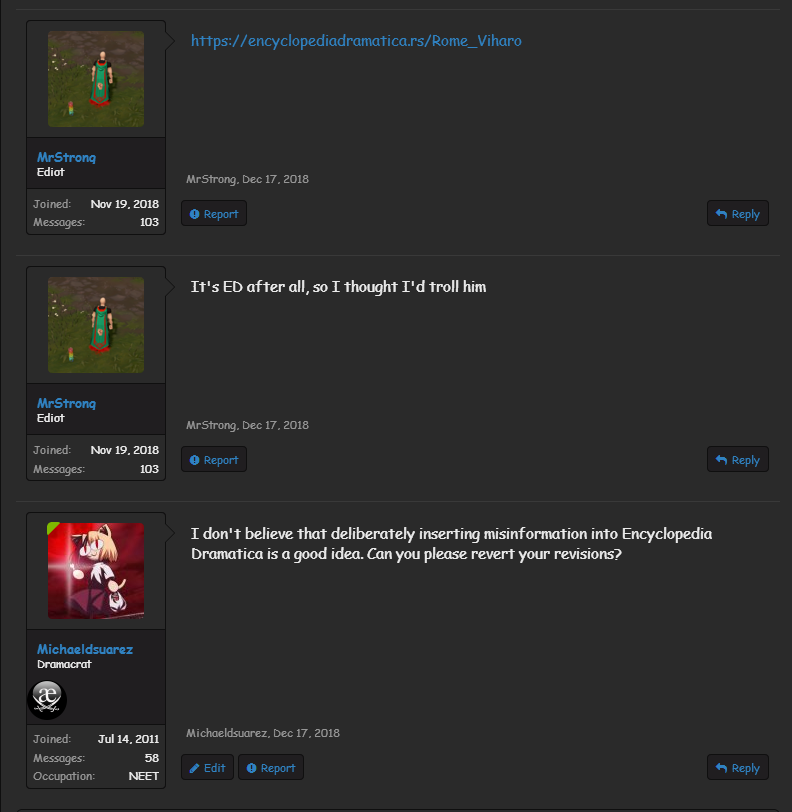 Yeah, just one last bank robbery before I stop. One last trolling. One last affair. One last article about my enemies. That was December 17. At that point, Rome Viharo, to my knowledge, had not named Darryl as Skeptic of Britain.  Certainly I hadn’t.

Oliver had been editing ED as MrStrong for some time. The trolling of December 20 did not go over well with ED admins, so he was blocked for a week. Somewhat to my surprise, but consistently with what he claimed to Michael, he did not come back when the block lifted. Instead, we saw BumChum; Tobias Raper and  FarLeftie. These might actually be Darryl.

So that conversation ended December 17. MrStrong, far from stopping, was trolling furiously. 71 edit trying to get some reaction. It got him blocked, and Michaeldsuarez (JuniusThaddeus), having asked him to revert the trolling of Viharo, and seeing Oliver instead expand his trolling, published the conversation, December 20. I did not see it until today (January 22).

As to stopping editing RationalWiki, something Oliver has done many times (See Freddo’s retirement statement — violated by Punisher and Concerned), but also who is  JosephGreen?

Found the IP edit mentioned in the conversation, I had not noticed this. So by 12/20/2018, it was known who Skeptic from Britain was, aside from my own research.

Wikipedia contributions 86.14.43.42, Virgin Media, Watford, I’ve seen that location many times in documenting the history of the Smith brothers. From my memory, this would be the IP address for their parent’s home, I will look at prior records. Edits from that IP:

These all look like they could be Darryl (it does not look like Oliver). (The source for the quote about Kuhlman might not be reliable source, indeed, but this shows that the IP was particularly knowledgeable. That the author was a fundamentalist was irrelevant, however, reliable source is about the publisher, not the author, so a point of view is revealed there, an anti-religious POV. None of this is terribly strong, but the evidence indicates recent activity. Checkuser may be able to pick up other accounts if an SPI case is filed.

(This image shows checkuser results from Encyclopedia Dramatica, showing that the IP was used by “ODS” — openly Oliver D. Smith — in July 2018, and for accounts Nivea, DueSouth, already listed, but also two accounts I had seen but did not list because they could be Mikemikev. They were not, they were intended to look that way by Oliver:

The photo used as an avatar for “Mikemikev” on the ED forum is of Peter Smith, a director for Walker Construction Consultants. The only reason I noticed this is this request by Tenchu, troll-renamed to BumChum. What this is doing is confirming the information about Oliver and Darryl, there really is a “Peter Smith” who is in that “family.” This strengthens the claim that the “twin” story is probably true.

Oliver keeps stirring the pot and complaining about what comes up.