(prior SE activity to be added)

Summary: filter warned for one self-reverted edit by me, one which was self-reverted. It also blocked edits by seven users who were not me.  This is a useless filter, causing damage, it may have driven one or more users away, and all edit filters consume server resources, because every edit must be compared with every filter (some conditions would be quick, but complex content filters will take much more time.)

This filter has had zero effect on my editing of RationalWiki, and has also not caught the impersonation socks. None.  See Commentary below.

This filter caught edits by:

WhiteWolf (talk | contribs) 03:19, 27 March 2018 (also hit the spam filter, went to Technical support as suggested, then hit the abd filter). He complained to Kazitor, who made him autoconfirmed, indicating that the filter only hits IP or new editors (which I considered likely). Kazitor said he’d look into improving the filters. He hasn’t, yet. The edit that triggered the spam filter, probably.

188.166.58.179 was me. 17:58, 24 March 2018, immediately self-reverted. The edit was allowed but a warning was issued on the filter log. The IP was blocked by Rimuru Tempest at 18:23. Most likely from Recent Changes or watching that talk page. The function of filter warning is to trigger immediate review. That, then, takes continual monitoring. Wikipedia admins have access to an active echo of the filter log. It’s unreliable because there is no concept of “duty admin.” This is also why the review of Recent Changes is unreliable, because there is no monitoring of RC reviewers, no sign-off on time sections of the log, instead, users line up to play Wac-a-Mole, individually, sometimes dozens or more of them at once, sometimes nobody.

Neverused 02:55, 24 March 2018 a long-time returning user. Knows the names of old regulars. Original account, Neveruse. User rights log is fascinating to one who knows older RW politics. His last discussion with David Gerard. No clue as to what Neverused, trying to edit the Saloon bar, was trying to do. Failing to edit the Saloon bar, he created his user page and responded to comments on talk. No more edits. The edit filter was not exactly welcoming! I’d imagine he’d think, so the assholes took over!

210.185.116.67 12:33, 23 March 2018 attempting to edit Augustus Caesar. WTF? No clue. the user made no edits that were allowed. The edit filter would ask for examination of the edits,  but the filter is Sekrit, so even sysops cannot read it or the log of what it caught. Nobody with the appropriate permission level was watching, apparently, because the user was neither blocked nor told how to avoid a problem. They simply went away.

In 2011, I gave up on Wikipedia, and decided to use the opportunity to test a procedure I had proposed for others, as to how banned users could make positive or at least harmless contributions without complicating block/ban enforcement. This procedure had been approved by an arbitrator before it was tried. It actually worked, but … eventually, administrators decided to ignore it and to treat the self-identified and self-reverted edits involved as disruptive. I documented the process on a Wikiversity user page, now visible as

One of the first actions taken on Wikipedia was to attempt to prevent me from mentioning my name in edit summaries, creating ever more complex filters. But why? Mentioning my name was intended to make ban enforcement easier. You don’t find an SPI case on me because I only — later — created one account to then further test how block evasion was being handled. I was not yet banned, that came later, the single account being an excuse.(Many accounts who have created many socks, defying blocks and bans, have not been “community banned,” so my community ban stands out as very unusual, and the discussion showed that.)

The edit filters created substantial collateral damage. So then the diligent enforcer started to hide the revisions. That got his wrist slapped, because this was over-use of revision deletion, intended to hide actually harmful material. Then they rolled out ever-broader range blocks (which also cause collateral damage), all to handle edits that were, practically by definition, harmless (and a number of them were reverted back in by regular users.) This was a demonstration of Wiki disease, where the original purposes and goals of the project are lost in administrative Obey Ma Authorite.

The use of the edit filters on RationalWiki has gone beyond mission, to an attempt to control content, all without discussion. The spam filter blocks much that prevents open discussion of obvious situations, yet it’s easy to get around.

RationalWiki has incompetent administration. It’s not surprising, considering how little experience is needed. RW has been treating me as if a noobie fanatic, but, in fact, my internet forum experience goes back to the W.E.L.L. in the 1980s, and I’ve managed many fora, including being a WMF sysop for a time on Wikiversity. I’ve dealt with disruption, then, if we include that test period in 2011, from both sides.

Anyone who cares to look could readily tell the difference between the many impersonation socks and the few genuine edits of mine on RationalWiki. Consider this a test of rational thinking, and … the RW community, almost entirely, falls flat on its face, faced with real tests.

It has been claimed on RationalWiki that I was accusing many RW users of being AP socks. No, the AP socks are possibly as many as 1% of RW users. That’s still a lot, but one of the socks explicitly claimed that number. “Just joking,” he later said, but it is possible. Most of the socks make a few edits and disappear. Given that, and given that the point of view of AP socks commonly aligns with RW standard, it can be very difficult to identify these accounts. I just found one that had entirely escaped notice. The account made only three or four edits, but the pattern was unmistakable. This behavior has been routine for years, it has been seen with hundreds of identified accounts.

Because of the flap generated by Skeptic from Britain on Wikipedia, I started studying the edit timings of SfB and Debunking spiritualism on RationalWiki. The match was good, though the overlap was not massive. I needed to see how a correlation between two independent users would appear. I have advanced techniques under study, where all this would be quantified, which are not being revealed, just the most obvious and easily seen without more sophisticated math.

So I did the same study using the edits of Bongolian, whom I never suspected of being an AP sock. It’s quite remarkable. This is what I saw, and after looking at the edit timings of a number of accounts, it poked me in the eye. The horizontal scale is dates, from December 31, 2017 to December 28, 2018. The vertical scale is the time of day (GMT, in fractions of an hour). The blue dots are Bongolian edits, the red open circles are Skeptic from Britain. 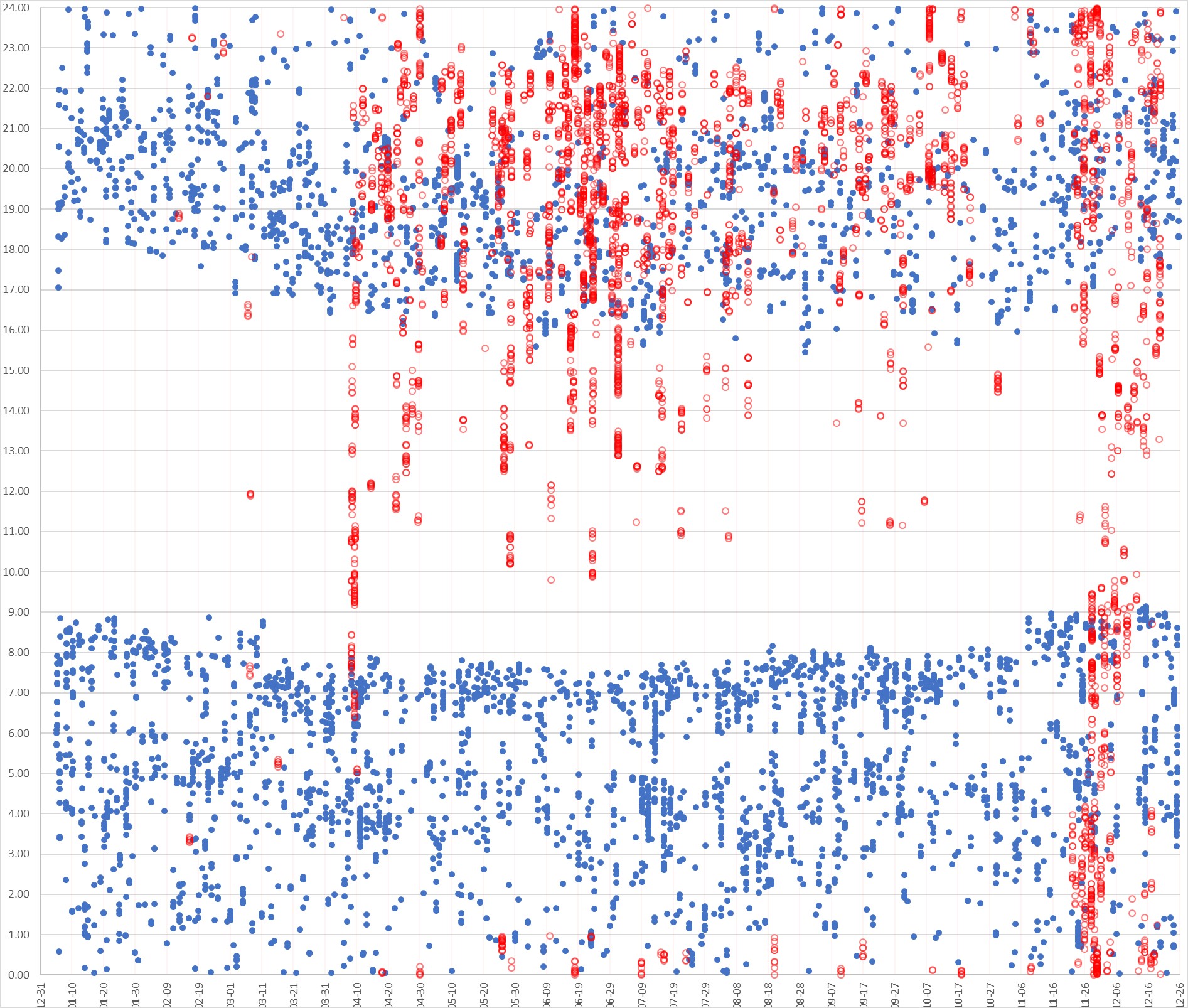 Let’s just say it’s obvious: Bongolian is not Skeptic from Britain. Bongolian’s editing habits are quite regular. However, it does not appear that he has a job, or, if he does, he may edit while working. For November 1 to about March 1, he starts editing at about 18:00 (GMT) and stops editing at about 09:00 (GMT). The rest of the year, those times shifted to an hour earlier. This reflects Daylight Saving Time.

The editing transitions in 2018 were on March 11 and November 8. The Daylight Time transitions were on March 11 and November 4 in the U.S. and March 26 and October 28. So between the US and England, Bongolian almost certainly lives in the US, and didn’t reset his clocks until four days after the transition. That happens, especially if one “works” at home and has no appointments for a few days.

As another English-speaking country, Australia does not match the Daylight Time transitions seen.

If Bongolian lives in the PST/PDT time zone, this would have him starting to edit, local time, at 10 AM, and stopping by 1 AM. There is a general reduction from about 2 PM to about 7 PM, and a narrower reduction from about 10 PM to 11 PM. Favorite TV program? People’s dietary habits vary greatly, and the regular diet of heavy RatWikians could be potato chips. But he might have breakfast before he starts editing, and then lunch/dinner is scattered and less regular. Bongolian seems normal to me for a heavy wiki user and active sysop, living in, say, California. Arizona is out because they don’t have Daylight Time. Could be Oregon, Washington, Nevada, parts of Idaho, or parts of BC, Canada.

The location of the Smith brothers is well known, confirmed by IP edits, etc, they live in England. I have a large amount of data from Darryl socks. Skeptic from Britain was literally all over the map, or clock, to be more accurate. He is not living a regular life.

Comparing Bongolian (blue) to SfB (red), there is no correlation of edit times visible. This is what independent editors look like.