More like Pyrite. Actually, that’s an insult to pyrite, which makes beautiful crystals. 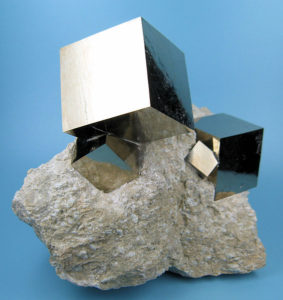 A fine example of exuberant extrapolation that is the sole content of so many believers’ arguments.

In 2012, Blackrock made a comment that they were keeping an eye on startups in various fields including LENR. From that one-time remark, the conclusion is drawn that the fossil fuel industry is focused on LENR.

I guess if you have nowhere to stand, all you can do is execute an endless series of leaps of faith.

Yep, they were watching it then, and they are now. Just take a look at Siffer’s website logs that he posts on occasion. When the Lugano report was posted, it was downloaded hundreds of thousands of times within a matter of days. There is a giant lurker community that spans the world, and they aren’t all hobbyists.

Interest in LENR is found in many communities. Even dedicated skeptics might download a report like Lugano, and this says nothing about “fossil fuel industry,” and that IHFB thinks it does indicates how he thinks. “interested observer” was pointing out the obvious obvious, and IHFB simply confirms it.

See here for one of many examples: http://www.sifferkoll.se/siffe…g-attention-to-the-e-cat/

“While looking in the logs after publishing the E-Cat report I found out that within minutes it was downloaded by an IP number owned by Blackrock.”

The Big Banks are Certainly Paying Attention to the E-Cat

Blackrock is a very large investment management firm ($5.4 trillion), not actually a bank. It has 13,000 employees. So … the IP evidence, if correct (and I have no reason to doubt it), indicates any one of a number of possibilities:

None of this makes it clear that “big banks” or the “fossil fuel industry” have a special focus on LENR, and it doesn’t even mean that any individual working for a big bank has a special interest, the download could have been idle curiosity — or some personal interest, not related to employment.

Indeed, the Sifferkoll blog post confirms the style of thinking, extrapolating from the thinnest of evidence, almost no evidence at all, to a dramatic conclusion that confirms the thinking of the analyst.

Sifferkoll shows a chart of oil futures, with a fall after the report was issued. The date is not shown and from the IP evidence, Sifferkoll must be referring to his hosting of the file, probably not the actual release. So someone may have been following his blog (and oil futures are his thing). Big surprise, someone at an investment firm invested in energy follows a blog on the topic?

10/7/2014 Sifferkoll announces that soon we will be able to read the “second independent third party report” (i.e., Lugano). The next day, Sifferkoll puts up the file, because arXiv rejected it.

From the timing of the download he labels “Report downloaded by Blackrock,” I vote for someone following his blog. They would get email notification of his posts. But it’s not “Blackrock,” it is someone likely working there, which may or may not represent a corporate interest.

His chart shows oil futures dropping from 88.20 to about 87.20. The currency is not stated (probably USD) and the time duration of the futures are not stated (and I don’t know how this is handled in those charts, since actual futures contracts may vary greatly).

However, that drop was actually tiny, compared to what was coming. The chart I found shows a drop around the beginning of 2015 to about 40. Now, futures reflect expected demand for oil at some point in the reasonably near future (though some, apparently, can be for as much as nine years ahead). What effect has Lugano had on demand for oil?

And suppose that Blackrock went into a “sell” position, betting that oil would go down. It is obvious that large forces were operating, and betting that oil prices would go down would have been a successful strategy at that point. Did it come from the Lugano report? Futures markets represent the thinking of thousands of people. How many of them would be aware of Lugano? — a report which is now widely discredited even among many who initially accepted it.

And this all fits into Sifferkolls conspiracy theory, that there are large forces operating to suppress LENR (such as those evil conspirators who are invested in solar power) — when those actually involved with LENR, for the most part — exceptions are rare — do not report any signs of this. There is just the normal skepticism, long-continued, and gradually fading as evidence becomes stronger.

Rossi’s claims never convinced skeptics, objections were far too obvious. Some people who knew that LENR is real — as a “laboratory curiosity” — may have been more friendly — a few –, but, among CMNS researchers, that interest has almost entirely vanished and has been replaced by a practice of ignoring Rossi.