In our investigations of the Pd – D2O and Pd alloy – D2O systems we have found that a
great deal of highly diagnostic qualitative and semi-quantitative information can be rapidly obtained by examining the time-dependence of the lower bound heat transfer coefficient, (k’R)11. The qualitative information is especially useful in this regard as it provides the answer to the key question: “is there generation of excess enthalpy within (or at the surface) of Pd cathodes polarised in D2O solutions?”

We examine first of all the time-dependence of (k’R)11 in the initial time region for the
blank experiment of a Pt cathode polarised in D2O solution which has been illustrated by Fig 2. Fig 4 shows that (k’R)11 rapidly approaches the true steady state value 0.728 × 10-9WK-4 which applies to this particular cell. We conclude that there is no source of excess enthalpy for this system and note that this measurement in itself excludes the possibility of significant re-oxidation of D2 at the anode or re-reduction of O2 at the cathode.

Figure 4. Plot of the heat transfer coefficient for the first day of electrolysis of the experiment described in Fig 2.

We examine next the behaviour of a Pd cathode in H2O, Fig 5. The lower bound heat transfer coefficient again approaches the true value 0.747WK-4 for the particular cell used with
increasing time but there is now a marked decrease of (k’R)11 from this value at short times. As we
have noted above, such decreases show the presence of a source of excess enthalpy in the system which evidently decreases in accord with the diffusional relaxation time of Η+ in the Pd cathode: this source can be attributed to the heat of absorption of H+ within the lattice. We also note that the measurement of (k’R)11 in the initial stages is especially sensitive to the presence of such sources of excess enthalpy because (θbath + Δθ)4 – θbath4 →  0 as t → 0, equation [4]. Furthermore, in the absence of any such source of excess enthalpy the terms [Ecell – Ethermoneutral,bath]I and CP,D2O,lM0(dΔθ/dt) will balance. The exclusion of the unknown enthalpy source must therefore give a decrease of (k’R)11 from the true value of the heat transfer coefficient. We see that this decrease is so marked for the Pd – H2O that (k’R)11 is initially negative! The measurements of (k’R)11 are highly sensitive to the exact conditions in the cell in this region of time, so that minor deviations from the true value (as for the Pt – D2O system, Fig 4) are not significant.

We observe also that measurements of (k’R)11 in the initial stages of the experiments provide an immediate answer to the vexed question: “do the electrodes charge with D+ (or H+)?” It is a common experience of research groups working in this field that some samples of Pd do not give cathodes which charge with D+ (or, at least, which do not charge satisfactorily). A library of
plots of (k’R)11 versus time is a useful tool in predicting the outcome of any given experiment!

We examine next the results for one Pd cathode polarised in D2O solution out of a set of four whose behaviour we will discuss further in the next section. Fig 6B gives the overall temperature-time and cell potential-time data for the second electrode of the set. The overall objective of this part of our investigations has been to determine the conditions required to produce high rates of excess enthalpy generation at the boiling point of the D2O solutions. Our protocol for
the experiment is based on the hypothesis that the further addition of D+ to cathodes already highly loaded with deuterium will be endothermic. We therefore charge the electrodes at low to intermediate current densities and at temperatures below 50°C for prolonged periods of time; following this, the current densities are increased and the temperature is allowed to rise. The D+ is then retained in the cathodes and we take advantage of the “positive feedback” between the temperature and the rate of excess enthalpy generation to drive the cells to the boiling point, Fig 6.

Figure 5. Plot of the heat transfer coefficient for the first day of electrolysis in a “blank” cellcontaining a 12.5 × 2mm palladium electrode polarised in O.1M LiOH at 0.250mA. 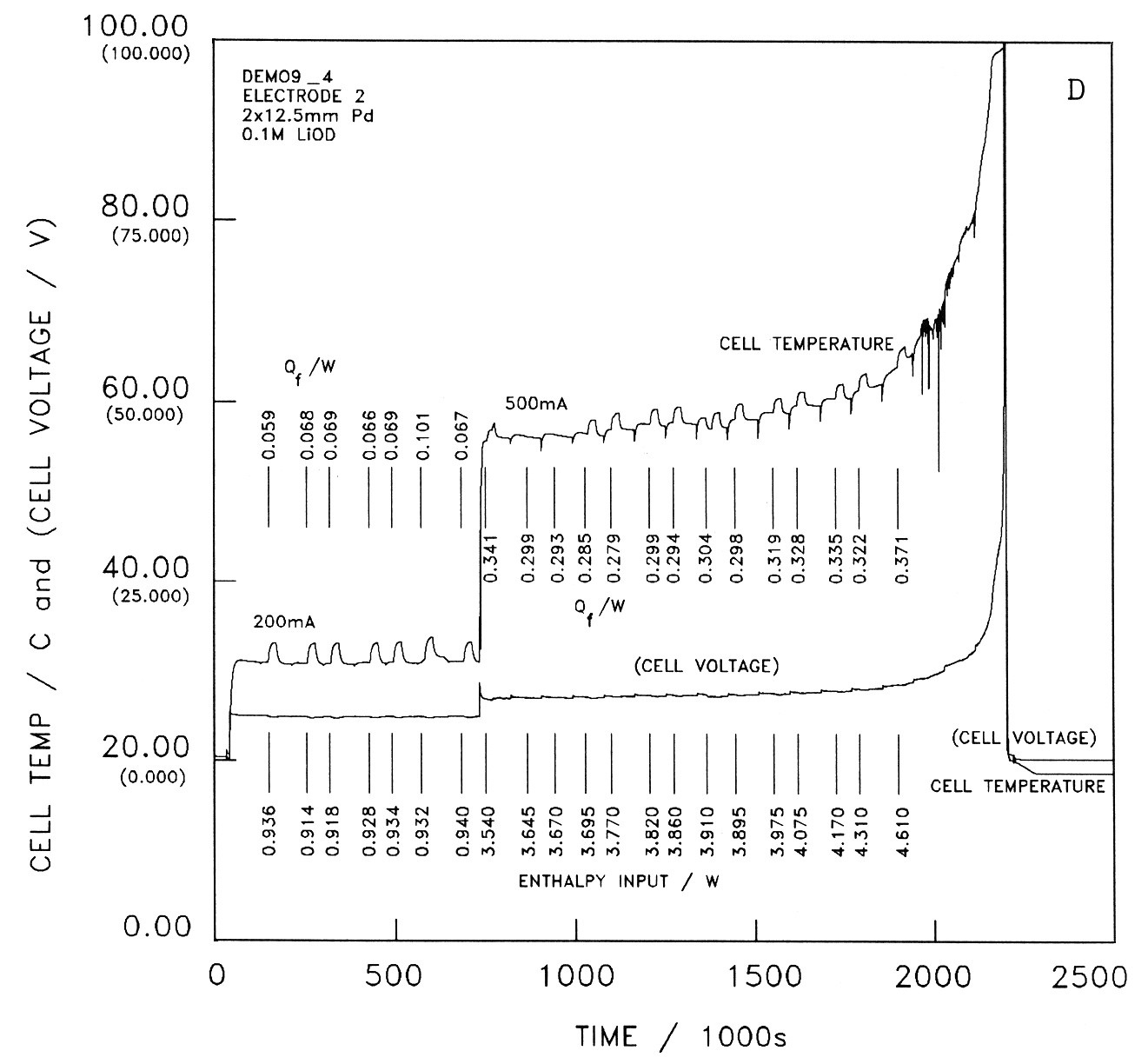 Figure 6. Temperature-time and potential-time profiles for four 12.5 × 2mm palladium electrodes polarised in heavy water (0.1M LiOD). Electrolysis was started at the same time for all cells. The input enthalpies and the excess enthalpy outputs at selected times are indicated on the diagrams. The current in the first cell was 0.500A. The initial current in each of the other 3 cells was 0.200A, which was increased to 0.500A at the beginning of days 3, 6, and 9, respectively.

We examine next the behaviour of the lower bound heat transfer coefficient as a function
of time in three regions, Figs 7A-C. For the first day of operation, Fig 7A, (k’R)11 is initially
markedly negative in view of the heat of dissolution of D+ in the lattice. As for the case of dissolution of H+ in Pd, this phenomenon decays with the diffusional relaxation time so that
(k’R)11 increases towards the true value for this cell, 0.892 × 10-9WK-4. However, (k’R)11 never
reaches this final value because a second exothermic process develops namely, the generation of
excess enthalpy in the lattice. In view of this, (k’R)11 again decreases and we observe a maximum:
these maxima may be strongly or weakly developed depending on the experimental conditions such as the diameter of the electrodes, the current density, the true heat transfer coefficients, the level of excess enthalpy generation etc.

We take note of an extremely important observation: although (k’R)11 never reaches the true value of the heat transfer coefficient, the maximum values of this lower bound coefficient are the minimum values of k’Rwhich must be used in evaluating the thermal balances for the cells. This maximum value is quite independent of other methods of calibration and, clearly, the use of

this value will show that there is excess enthalpy generation both at short and at long times. These estimates in Qf (which we denote by (Qf)11 are the lower bounds of the excess enthalpy. The conclusion that there is excess enthalpy generation for Pd cathodes polarised in D2O is inescapable and is independent of any method of calibration which may be adopted so as to put the study on a quantitative basis. It is worth noting that a similar observation about the significance of our data was made in the independent review which was presented at the 2nd Annual Conference on Cold Fusion. (6) 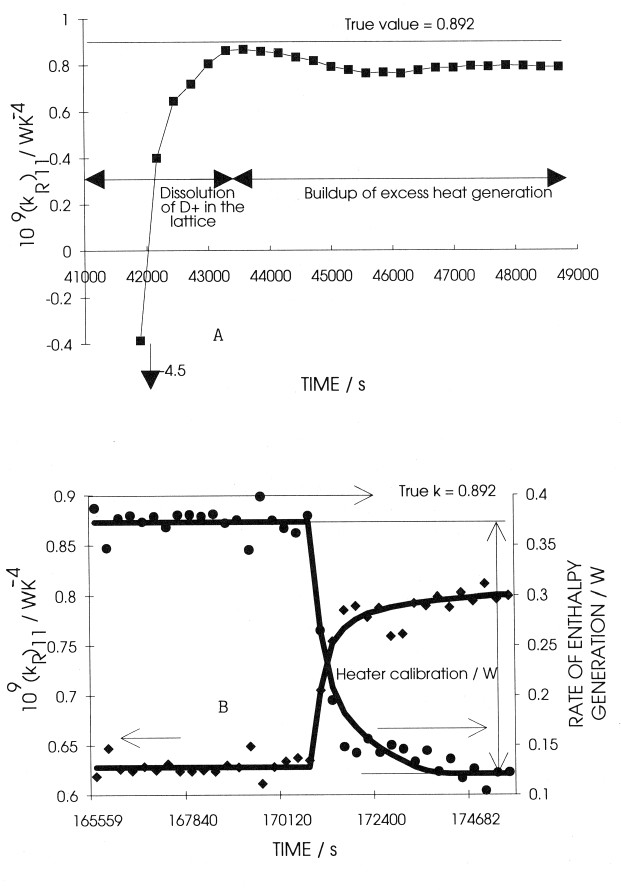 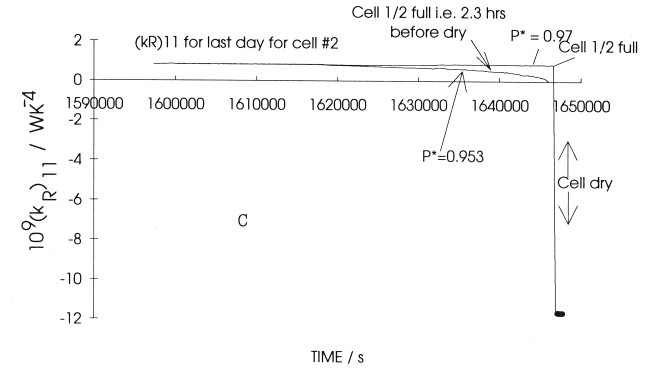 Figure 7. Plots of the lower bound heat transfer coefficient as a function of time for three different periods of the experiment described in Fig. 6B: (A) the first day of electrolysis, (B) during a period including the last part of the calibration cycle, and (C) the last day of electrolysis.

We comment next on the results for part of the second day of operation, Fig 7B. In the
region of the first heater calibration pulse (see Fig 6), (k’R)11 has decreased from the value shown
in Fig 7A. This is due to the operation of the term ΔQ which is not taken into account in
calculating (k’R)11, see equation [4]. As we traverse the region of the termination of the pulse ΔQ,
t=t2, (k’R)11 shows the expected increase. Fig 7B also illustrates that the use of the maximum value of (k’R)11, Fig 7A, gives a clear indication of the excess enthalpy term ΔQ, here imposed by the resistive heater. We will comment elsewhere on the time dependencies of (k’R)11 and of Q in the regions close to t = t1 and t = t2. (8)

The last day of operation is characterised by a rapid rise of temperature up to the boiling point of the electrolyte leading to a short period of intense evaporation/boiling Fig 8. The evidence for the time dependence of the cell contents during the last stages of operation is discussed in the next section. Fig 7C shows the values of (k’R)11 calculated using two assumed atmospheric pressures, 0.953 and 0.97 bars. The first value has been chosen to give a smooth evaporation of the cell contents (M0 = 5.0 D2O) i.e., no boiling during the period up to the point when the cell becomes dry, 50,735 s. However, this particular mode of operation would have required the cell to have been half-full at a time 2.3 hrs before dryness. Furthermore, the ambient pressure at that time was 0.966 bars. We believe therefore that such a mode of operation must be excluded. For the second value of the pressure, 0.97 bars, the cell would have become half empty 11 minutes before dryness, as observed from the video recordings (see the next section) and this in turn requires a period of intense boiling during the last 11 minutes. It can be seen that the heat transfer coefficient (k’R)11 decreases gradually for the assumed condition P = 0.953 bars whereas it stays more nearly constant for P = 0.97 up to the time at which the cell is half-full, followed by a very rapid fall to marked negative values. These marked negative values naturally are an expression of the high rates of enthalpy generation required to explain the rapid boiling during the last 11 minutes of operation. The true behaviour must be close to that calculated for this value of the ambient pressure. 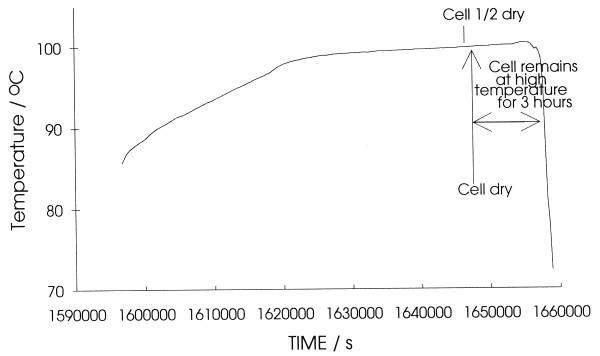 Figure 8. Expansion of the temperature-time portion of Fig 6B during the final period of rapid boiling and evaporation.

Figs 9A and B give the rates of the specific excess enthalpy generation for the first and last day corresponding to the heat transfer coefficients, Figs 7A and C. On the first day the specific rate due to the heat of dissolution of D+ in the lattice falls rapidly in line with the decreasing rate of diffusion into the lattice coupled with the progressive saturation of the electrode. This is followed by a progressive build up of the long-time rate of excess enthalpy generation. The rates of the specific excess enthalpy generation for the last day of operation are given for the two assumed atmospheric pressures P*=0.953 and 0.97 bars in Fig 9B. These rates are initially insensitive to the choice of the value of P*. However, with increasing time, (Qf) for the first condition increases reaching ~300 watts cm-3 in the final stages. As we have noted above, this particular pattern of operation is not consistent with the ambient atmospheric pressure. The true behaviour must be close to that for P*=0.97 bars for which (Qf) remains relatively constant at ~ 20W cm-3 for the bulk of the experiment followed by a rapid rise to ~ 4kW cm-3as the cell boils dry.

We dedicate this paper to the memory of our friend, Mr. Minoru Toyoda.